Link to this page

Betalo Nude
Order a Hand-Painted Reproduction of this Painting 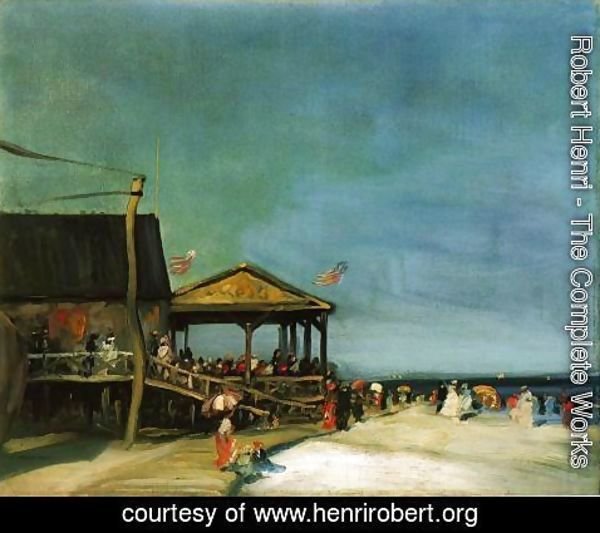 Robert Henri was born Robert Henry Cozad in Cincinnati, Ohio to Theresa Gatewood Cozad of Malden, Virginia and John Jackson Cozad, a gambler and real estate developer. Henri had a brother, Johnny, and was a distant cousin of the noted American painter Mary Cassatt. In 1871, Henri's father founded the town of Cozaddale, Ohio. In 1873, the family moved west to Nebraska, where they founded the town of Cozad.

In October 1882, Henri's father became embroiled in a dispute with a rancher, Alfred Pearson, over the right to pasture cattle on land claimed by the family. When the dispute turned physical, Cozad shot Pearson fatally with a pistol. Cozad was eventually cleared of wrongdoing, but the mood of the town turned against him. He fled to Denver, Colorado, and the rest of the family followed shortly afterwards. In order to disassociate themselves from the scandal, family members changed their names. The father became known as Richard Henry Lee, and his sons posed as adopted children under the names Frank Southern and Robert Earl Henri (pronounced "hen rye").

In 1883, the family moved to New York City, then to Atlantic City, New Jersey, where the young artist completed his first paintings. 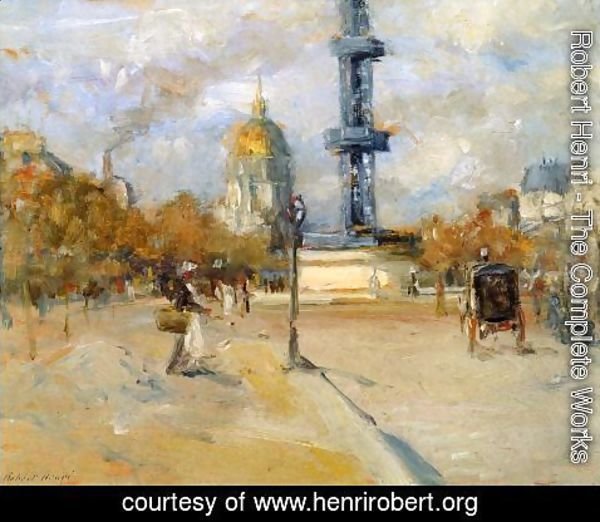 In 1886, Henri enrolled at the Pennsylvania Academy of the Fine Arts in Philadelphia, where he studied under Thomas Anshutz. In 1888, he traveled to Paris to study at the Académie Julian, where he studied under William-Adolphe Bouguereau and embraced Impressionism. With time, he was admitted into the École des Beaux Arts. He visited Brittany and Italy during this period.

By the end of 1891, he returned to Philadelphia, studying under Robert Vonnoh at the Academy. In 1892, he began teaching at the Philadelphia School of Design for Women.

In Philadelphia, Henri began to attract a group of followers who met in his studio to discuss art and culture, including several illustrators for the Philadelphia Press newspaper who would become known as the 'Philadelphia Four': William Glackens, George Luks, Everett Shinn, and John French Sloan. The gatherings became known as the "Charcoal Club", featuring life drawing and readings in the social philosophy of Ralph Waldo Emerson, Walt Whitman, Émile Zola, and Henry David Thoreau. By 1895, Henri had come to reconsider Impressionism, calling it a "new academicism."

For several years, he divided his time between Philadelphia and Paris, where he met the Canadian artist James Wilson Morrice. Morrice introduced Henri to the practice of painting pochades on tiny wood panels that could be carried in a coat pocket along with a minimal kit of brushes and oil. This facilitated the kind of spontaneous depictions of urban scenes which would come to be associated with his mature style.

In 1898 he married Linda Craige, a student from his private art class. The couple spent the next two years on an extended honeymoon in France, during which time the French government purchased his painting, La Neige ("The Snow"), to be displayed in the Musée du Luxembourg.

In 1906, he was elected to the National Academy of Design, but when painters in his circle were rejected for the Academy's 1907 exhibition, he accused fellow jurors of bias and walked off the jury, resolving to organize a show of his own. He would later refer to the Academy as "a cemetery of art."

In February 1908, Henri organized a landmark show entitled "The Eight" (after the eight painters displaying their works) at the Macbeth Gallery in New York. Besides his own works and those produced by the "Philadelphia Four" (who had followed Henri to New York by this time), there were paintings by Maurice Prendergast, Ernest Lawson, and Arthur B. Davies. These painters and this exhibition would become associated with the Ashcan School, although the content of the show was diverse and that term was not coined until 1934. Henri was at the heart of the group who led the depiction of the tough, exuberant city. Having spurned academic painting and Impressionism as an art of mere surfaces, Henri wanted art to be akin to journalism, and, 'for paint to be as real as mud, as the clods of horseshit and snow that froze on Broadway in the winter.' Looking at Henri's Salome of 1909 the critic Robert Hughes observed: " Her long legs thrust out with strutting sexual arrogance, and glint through the over-brushed back veil. It has far more oomph than hundreds of virginal, genteel muses, painted by American academics. He has given it urgency with slashing brush marks and strong tonal contrasts. He's learned from Winslow Homer, from Édouard Manet, and from the vulgarity of Frans Hals."

In 1910, Henri organized the Exhibition of Independent Artists, a no-jury, no-prize show modeled after the Salon des Independants in France. Works were hung alphabetically to emphasize the egalitarian philosophy. Walt Kuhn, who took part in this show, would come to play a key role in the Armory Show, an exhibition mounted in 1913 that introduced many American viewers to avant-garde European art. Five of Henri's paintings were included in the Armory Show.

Henri admired anarchist and Mother Earth publisher Emma Goldman, and taught from 1911 at the Modern School. Goldman, who later sat for

From 1915 to 1927 he was a popular and influential teacher at the Art Students League of New York. His ideas on art were collected by former pupil Margery Ryerson and published as The Art Spirit (Philadelphia, 1923).

In the spring of 1929 Henri was chosen as one of the top three living American artists by the Arts Council of New York. Henri died of cancer in the summer of 1929. He was honored with a memorial exhibition at The Metropolitan Museum of Art in 1931. (From Wikipedia)

Report an error on this page